FRESH SEX AND THE CITY FINDS

I don’t know whether you’d agree, but despite Borgen, The Bridge, Orange is the New Black, and all those other fabulous series, I still miss Sex and the City. Because I’m going to New York soon, that craving only gets bigger. I can draw an orgastic pleasure when  I watch an episode I haven’t seen before, but that won’t be able to happen anymore. I’ve watched them all. At least 15 times. Here’s a junkie speaking. But you must have already noticed.

Absolutely brilliant of me to happen upon these great facts when I was scouring the internet and found this American TV_Blog.  10 Things you didn’t know about Sex  and the City.

2. Cynthia Nixon, the earring fetishist, doesn’t have pierced ears. All her earrings are old-fashioned clip ons. Some designers even sent their earrings to the jeweller’s to turn them into clips. An appearance in Sex and the City is worth a lot.

3. The tutu that Carrie wears int he leader (and got splashed by a passing bus, that one) was bought in a vintage store and only cost about 5 dollars.

4. The final SATC episode (An American Girl in Paris-Part Deux) was only ready for four days before it was broadcast. And I thought I was a deadline junkie.

The note on Carrie’s wedding dress had been really handwritten by Vivienne Westwood.

5. Do you remember the scene in which Trey proposes to Charlotte? That was in front of a faux Tiffany’s window display. Tiffany didn’t want them to film in front of the real store (probably because of privacy reasons for other customers), but they did send an employee and a faux window in front of which to record the scene.

6. There’s a bit continuity error in the leader. The bus that splashes Carrie is full with passengers when it passes, the camera closes in on Carrie only to then include the bus again which, suddenly, is entirely empty.

7. Sometimes, Sarah Jessica Parker had to play Carrie for 18 hours a day. Always in Manolo’s or Jimmy Choo’s. Best job in the world.

8. Up until episode 12 of season 4, Sarah Jessica Parker’s name was credited on the Twin Towers. After 9/11, the makers credited her name on the Empire State Building.

9. The note on Carrie’s wedding dress in the movie had been really handwritten by Vivienne Westwood.

Right, discovering an old episode won’t happen to me. But whenever I find a present like this, I’ve got enough to keep me going. Meanwhile, I’m greatly anticipating movie number 3.

ARE YOU REALLY A DIE HARD FAN OF SEX AND THE CITY? DO THE TEST TO FIND OUT. 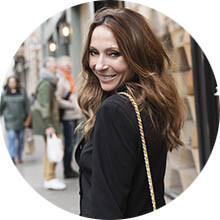